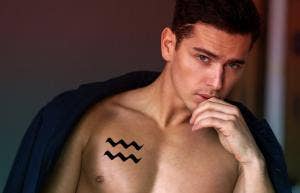 People who are born between January 20 and February 18 have an Aquarius Sun sign.

Aquarius is ruled by Uranus, the planet that governs innovation and unexpected events, and Saturn, the planet of restriction, structure and pessimism.

Aquarius is an Air sign known for ethereal thinking and spirituality, but is also a Fixed sign, meaning they tend to be traditionalists who fight for their beliefs.

The Aquarius man is as alluring as he is confusing. He’s unconventional and often hard to define. Despite what the name suggests, Aquarius despises conventionality.

In fact, Aquarius men think differently; they’re all about the greater good and are probably more interested in their humanitarian efforts than building romantic connections.

Symbolized by a Water Bearer — the mystical healer who brings water, or life, to the land — Aquarius loves to give back. Aquarian men believe in “power to the people,” and aspire for social change in all aspects of life. He hates being boxed in, making him hard to read and, at times, even harder to understand.

But these men are visionaries, always thinking of the big picture, and often forgetting to focus on what surrounds them in the present.

Aquarius Man In Love and Relationships

Aquarius men are notorious for leading bachelor lifestyles. Eccentric and marching to the beat of their own drum, it takes someone extra patient and understanding to tie down an Aquarius male.

His approach to dating is highly unconventional, and a date with him won’t feel like a date at all. But with his absurd sense of humor and an intellect, he charms just about anyone (often multiple people at once).

Since he has a deep love of people, his romantic relationships progress from long-standing platonic connections over time, and once he falls in love, it’s like dating your quirky best friend. But free-spirited Aquarius hates to feel tied down, so he needs plenty of space for independence, especially when in a relationship.

However, his caring, sensitive side will always be there for you if needed. And provided he can put aside his concerns for the greater good for long enough to listen to you, he’ll be armed with advice and guidance to get you through the hard times.

But a relationship with Aquarius men isn’t without its downsides. He has trouble communicating his true feelings, making him appear uncomfortable and disconnected. If Aquarius can find confidence within himself and trust that his emotions are valid, he’s perfectly capable of having a healthy relationship where he and his partner share equal respect for one another.

With Aquarius compatibility, this man is most compatible with fellow Air signs Libra and Gemini, and Fire signs Aries and Sagittarius.

Libra and Aquarius both fight for the underdog, love trying new things, and teach each other endless knowledge; Gemini is a good match for Aquarius’ rapid mental pace and sociable nature; Aries is naturally drawn to Aquarius’ uniqueness, and shares their quirkiness and free thought; Sagittarius is just as independent, daring and social as Aquarius, and wants to change the world for the better.

Aquarius has a high libido and desire for sex, but tends to be more focused on the bigger picture of saving the world, meaning they can go a long time without intimacy like this. Still, when he does find the right partner to seduce, it doesn’t exactly matter if there’s no emotional connection.

Sex with him is full of trying new things and experimentation. He’s not shy when it comes to showing this side of himself, and tends to do so with multiple partners. But if his sexual partner doesn’t understand his personality, they may be confused by the Aquarius man’s distant and detached disposition.

The Aquarian man is a humanitarian, a problem-solver, and a deep-thinker who is independent, free-spirited, eccentric and creative. But this intellectual zodiac sign is also assertive, radical, aloof, distant, stubborn, self-righteous, and overly ambitious.

He’s a force to be reckoned with, and his quest for knowledge is always ongoing. Their thirst for learning new things also means they frequently come up with new, unique ideas, and have no qualms about voicing their opinions and subsequently defending them.

Aquarius is also incredibly creative and free-spirited, and tends to think about things on a different level than most people. And because they are independent, they march to the beat of their own drum, set their own path, and don’t follow in anyone’s footsteps.

But Aquarius also has a dark side, just like the other signs of the Zodiac. Because he’s so independent and free-thinking, the Aquarius man tends to be unpredictable and unreliable. He acts before he thinks, and does so in a way that will prevent others from holding him back. But there’s no telling what he will do next, and this can be unsettling for those in his life.

Another trait that turns people off is Aquarius’ stubbornness to change, especially once they have set their mind on something. Even if they are wrong, they will fight tooth and nail to defend themselves.

RELATED: 3 Reasons Why Aquarius Is The Most Complicated Lover In Astrology

You’ll rarely catch an Aquarius man becoming a slave to corporate life. Desk jobs and boardrooms are not the arena he aspires to. Aquarius men see these kinds of careers as oppressive to their individuality. Their creativity cannot be stifled by any job.

Aquarius flourishes in roles where creativity and mental stimulation are prioritized. Their unmatched charisma means they can charm their way to the top of the business ladder, attracting investors and schmoozing bosses into giving them raises.

Idealistic and intellectual, Aquarius wants to solve problems and bring joy and peace to a large scale audience. Their profession is often unexpected, forging their own paths via their careers.