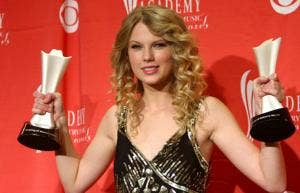 Taylor Swift was born on December 13, 1989 in Reading, Pennsylvania at 5:13 a.m. EST. She has four planets in the zodiac sign of Capricorn.

Taylor Swift is a singer and songwriter who has a Sagittarius Sun. Her Moon sign is in Cancer at 1 degree.

RELATED: Is Taylor Swift Pregnant? Fans Have Theories Based On 'Folklore' Lyrics

Her natal chart and zodiac sign reveal a lot about this amazing celebrity.

Your Sun sign gives you insight into your identity, ego, and path in life.

With Taylor’s Sun in Sagittarius, she tends to be very happy, kind, and cheerful.

Sun in Sagittarius people love being social and making friends.

They also are very adventurous and always want to keep busy.

They are very optimistic and enjoy the lighter side of life.

They love to have fun, laugh, and get to know others.

They also tend to see the best in everyone and everything since they are so positive.

Sun in Sagittarius people are very curious and love to learn as much as possible about the topics that pique their interest.

It takes a lot to get them angry but they are very quick to forgive and forget. They value their freedom and love to explore.

A Moon sign rules your emotions, feelings, and moods.

With Taylor’s Moon in Cancer, she is likely very connected to her feelings.

Moon in Cancer people can be incredibly emotionally intelligent.

They understand their emotions and how those around them are feeling.

They are also very sentimental and yearn for familiarity, safety, and comfort.

They value being alone, calm, and peaceful. They don’t like to be thrown for a loop or surprised because they prefer stability.

They would rather experience something fun and connect with others than focus on the material things in life.

However, Moon in Cancer people can really connect to their emotions too strongly at times.

If they are sad or hurt, they can focus on it and spiral into feeling even sadder.

They also get taken for granted a lot and when they realize this, they won’t handle it directly.

Instead, they will try to express their feelings in an indirect but attention-grabbing way.

They sometimes even run with their feelings too much that they lash out in an irrational manner.

However, once they feel like they have felt their feelings then they will heal and move on quickly.

They are very loyal friends and are always there for the people they care about.

They can have a pretty zany sense of humor and love to be silly. They also have a different perspective on life and see things in a way that others don’t.

They appreciate being treated kindly and affectionately.

They just want security and if they are given that, then they will give comfort and love right back.

RELATED: Who Is Taylor Swift's Song 'Betty' About? Theories About The Mysterious Lyrics

With Taylor’s Mercury in Capricorn, she usually communicates in a slow and elegant way.

She is very structured and processes information in a very practical way.

Mercury in Capricorn people get overwhelmed when too much information is given to them at one time.

They prefer breaking down information and looking at things from piece to piece before making a conclusion.

They like to learn and tend to be very curious so they enjoy working towards their goals and aspirations.

They really dislike being lied to or being thrown for a loop.

They also get annoyed when others don’t understand simple information that seems like general knowledge to them.

Mercury in Capricorn people tend to be trustworthy and like to be in control of situations.

They have a very methodological way of looking at things and their perspective seems to be pretty straight forward.

Even when they talk to others, they express themselves in a straightforward way because they don’t want to waste anyone's time.

They usually reject foolish and impractical ways of thinking or information.

They could even come off as more serious and conservative than they are because they think things through in a skeptical way.

Venus rules what and how you love. In Aquarius, Venus is an innovator.

Taylor Swift is a talented singer and song-writer who has produced many hits, and she's been performing music at an early age.

She started off as a country singer and gained success by the age of 16. Her first hits were the songs “Tim McGraw” and “Teardrops On My Guitar” from her first studio album, Taylor Swift, in 2006.

She released the Grammy-winning album Fearless in 2008 which had hit songs like “Love Story” and “You Belong With Me.”

For her Grammy win for Fearless in 2010, Swift became the youngest artist in history to win Album of the Year at 20 years old.

She also had albums like Speak Now and Red and with those albums, she became the first woman to sell more than one million copies of two albums in their opening week.

With Taylor’s Venus in Aquarius, she is likely very accepting and non-judgemental.

Venus in Aquarius people are alluring when they are acting distant.

They come off as quirky, seductive, and defiant.

They don’t usually paint by the numbers when it comes to relationships and like to just see how things progress naturally.

They tend to be drawn to weird and quirky people and partnerships.

They could come off as aloof at times but truly want a partner that values their intelligence and dreams.

They want a partner that they consider a friend.

They also need their own space and freedom and will give their partner the same because they aren’t overbearing or possessive.

When they are in love, they are very giving and kind to their partner.

They aren’t clingy and are