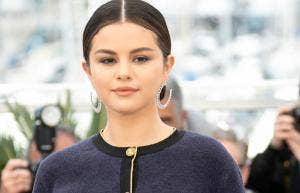 Selena Gomez zodiac signs are Sun in Cancer, Moon in Aries; her Mercury and Venus are in Leo.

Selena Gomez's zodiac signs and birth chart with astrology says so much about her.

RELATED: What Is An Astrology Zodiac Sign Natal Chart & Where To Get Yours For Free

Selena's Saturn is in the zodiac sign of Aquarius, the humanitarian, and it's in her seventh house of marriage, which signals hardship in love during the first half of her life.

She has two planets in Capricorn and two planets in Leo. Her birth chart is called the 'splay' because she has several planets conjunct in the same zodiac sign, forming what's called a Grand Trine, which also means hardship but growth through difficulty.

Selena Gomez was born on July 22, 1992. To learn more about her, keep reading for her full birth chart.

The Sun sign in astrology gives you insight into your identity, ego, and path in life.

With Selena’s Sun in Cancer zodiac sign, she likely is very protective and caring towards her loved ones.

However, Sun in Cancer people can be a bit reserved when it comes to expressing their deepest thoughts to people around them.

They tend to hide their sensitive side but learn to show it more as they get older.

They can sometimes dwell on the past and they can be pretty emotional.

They dislike change and seek comfort and stability in their life.

They listen to their gut feelings when they meet new people, travel to new locations, or are in new situations.

They love connecting with others and they are very loving, but they need time alone to recharge their energy.

Cancer’s can be delicate and often get scared or run away when people are too harsh or rude to them.

They aren’t confrontational but can be manipulative and sneaky when trying to make things go their way. However, they are known for their compassion, loyalty, and kindness.

The Moon sign rules your emotions, feelings, and moods.

With Selena’s Moon in Aries zodiac sign, she tends to be restless and active.

Moon in Aries people don’t like waiting for things to happen and instead want to take matters into their own hands.

They can be pretty spontaneous and impulsive with their decisions and actions.

They dislike being bored and always want to be doing something exciting. It is difficult for them to see the big picture and instead take things moment by moment.

They are incredibly passionate and direct because Aries is a fire zodiac sign.

When they have problems, they face them head-on but they can get emotional if they feel hurt.

At times they internalize and take things a little too personally. However, they try to deal with their problems swiftly so they can move forward so they won’t be upset for too long.

They lead with confidence, independence, and strength even if they aren’t feeling those things.

They tend to have a lot of different crushes and generally like the thrill of the chase but can move on pretty quickly once they get bored.

They have strong desires and go after what they want.

Moon in Aries people are very impulsive and usually get what they want when they want it.

With Selena’s Mercury sign in Leo, she comes off as pretty authoritative and in control when she is speaking.

Selena Gomez also publicly speaks out about her battle with lupus, which is an autoimmune disease that causes fatigue, headaches, pain, and facial swelling.

In 2017, she announced that she had to get a kidney transplant because of lupus and her good friend Francia Raisa was the donor.

Oftentimes, Mercury in Leo people are mature sounding and persuasive when sharing their beliefs.

They are great at sharing their ideas and getting people to see things the way they do.

They enjoy expressing themselves and stand firmly in their beliefs. Because of this, they can come off as dreamy and visionary individuals.

They also like to express themselves in a creative and fun way.

When talking to others, they like to tell a story and sometimes tap into their more dramatic side when getting their message across.

Although, they usually believe their opinions are always right and it can rub others the wrong way. They could even come off as know-it-alls and vain, although they do not do this on purpose.

Venus rules what and how you love, and when in Leo, you need your partner's attention and admiration.

With Selena’s Venus in Leo, she tends to be appreciative of her partner when she is in a relationship.

Venus in Leo people like the attention when they are in a relationship and often enjoy the chase in the beginning of the relationship.

Venus in Leo people are kind and sweet to their partner and really cherish love and think highly of relationships.

They are incredibly loyal to their significant other and expect the same in return.

They seek attention and praise from their partner and will be incredibly satisfied if they are getting that.

They want to be showered with compliments and can become uninterested if they feel like their partner is starting to dislike them.

They also like to keep their relationship feeling alive because they are scared of it getting stale or uneventful.

Although Venus in Leo people enjoy intimacy, they value love more because they are romantics at heart and need to be in a loving relationship.

They also enjoy spoiling their partner with gifts and are very giving with their money.

They enjoy the finer things in life