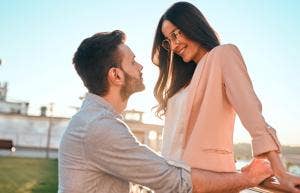 If you want an epic love story with your own hero or heroine, you need to find a Scorpio.

When it comes to Scorpio compatibility, not all signs can keep up with this mysterious zodiac sign. They're hot, passionate, have an edge to them, and, in terms of zodiac compatibility, you'd be lucky to have them.

According to astrology, the Scorpio personality doesn’t do boring; often times, they don’t do easy. But it's these contradictory traits that make Scorpio such a great partner.

What makes a good or bad match for Scorpio?

Those who can withstand Scorpio compatibility know they should never lie to them or betray them.

If you hurt a Scorpio, it will be a huge challenge to get them to trust you again. They aren’t the most forgiving of the zodiac signs. Scorpios are independent, and if anyone is the dominant or controlling partner in the relationship, it’s probably them.

Scorpios may not be the most misunderstood sign, but they're not easy to read; their personalities are made up of a number of contradictions. They want their partners to be completely honest with them, but they reserve the right to hold back everything about themselves.

They’re extremely private and tend to have an air of mystery about them. Scorpio intrigues us, and we want to know more. It doesn't matter how long you’re in a relationship with Scorpio — you will run out of things to discover.

You can’t talk about Scorpio traits without mentioning how gifted they are sexually. It’s been said that there is no one more passionate or creative. Their never-ending libido is legendary, and no one compares to a Scorpio in the bedroom.

Scorpio Compatibility With Each Of The 12 Zodiac Signs

Love: Scorpio and Aries are a tricky combination as they're at cross-purposes when it comes to a relationship.

They're both devoted, loyal signs who won't struggle to be faithful to one another. But arguments can drive these two apart.

Scorpio is very sensitive, and when Aries is in a mood, they will say anything, even if it's hurtful. Scorpio will push back just as hard. When there is a misunderstanding or an argument, Aries will get over it quickly, whereas Scorpio will nurse a grudge until they have payback.

Sex: They both have a lot of sexual energy, so they get along on that front.

Aries is a Fire sign but Scorpio might get burned if they get too close to the flame. Aries is wild in bed but lacks the depth Scorpio needs to feel satisfied. Scorpios tend to keep things to themselves and want things to improve over time, and Aries is much more open and can be all or nothing right off the bat.

Long-term Relationships and Marriage: Scorpio wants to have a strong emotional bond, while that may not be Aries' thing.

In a long-term relationship, Scorpio can wind up feeling starved for attention and emotional understanding. Physical intimacy can only go so far. If these two are not on the same emotional playing field, the game is lost.

Love: Taurus is dynamic enough to capture Scorpio's interest and has enough of a sense of self to keep it. The problem is that both signs are stubborn, strong-willed, and prone to bouts of jealousy.

Both signs take a long time to build up trust, but it's a lot easier to gain it back once you've lost it with Taurus. But they don't have much in common, so there tend to be long, drawn-out pauses when they're having a conversation. Things might fizzle out after a while between these two.

Sex: These two have an "opposites attract" kind of dynamic. Both enjoy touch and the physical side of love, so that is a plus.

With Venus ruling Taurus, and Mars and Pluto controlling Scorpio, physical intimacy might be the only common ground. They're both steady, sensual lovers who will satisfy each other's needs from the jump. That said, since neither likes surprises, their sex life might grow repetitive over time.

If there is a disagreement, these two may never relinquish their position. However, Scorpio is often secretly glad to meet their match. These two will have to learn to give and take power in order to avoid locking horns.

Love: And the award for least compatible with Scorpio goes to Gemini! If they're going to make it work at all, they're going to have to learn to accept and understand each other's differences, which are numerous.

Gemini is chatty and open while Scorpio is more closed off and secretive. Scorpio has intense, laser-like focus, and Gemini gets bored easily and flits from one subject to another. They can be in the same friend circle, but one-on-one there are major challenges.

Sex: It's hard to imagine any scenario where these two find themselves alone in a room together, let alone in bed.

Scorpio loves to be completely wrapped up in their partners, while Gemini always needs to feel space and freedom. If Scorpio is willing to let go of their "all or nothing" attitude, these two can find room for a fun, no-strings-attached fling.

Long-term Relationships and Marriage: The kind of control Scorpio wants over their relationships is in opposition with Geminis's dreams of a free, open marriage.

Social Gemini might accidentally set off Scorpios jealousy. Scorpio takes betrayal hard, and Gemini tries to let go of any negative feelings as quickly as possible. Gemini has no problem telling a white lie if it will save someone from getting hurt (especially themselves), and for Scorpio, any lie is a deal-breaker.

RELATED: The Best And Worst Love Matches For Your Zodiac Sign, According To Astrology

Love: Scorpio is one of the most compatible signs with Cancer. Both signs are emotional, sensitive, and passionate.

Cancer is more forthcoming with their feelings than Scorpio, which is more than fine for