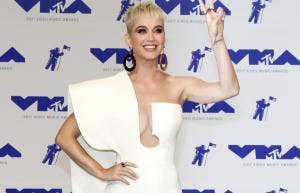 Katy Perry's birth chart is fascinating when analyzed using astrology. She has a stellium, two yods, multiple planetary squares, and her chart pattern is a bundle.

She is a Sun, Moon and her rising zodiac sign in Scorpio, and she was born during a waxing crescent Moon.

RELATE: Is Jennifer Aniston The Godmother Of Katy Perry’s Baby?

Katy Perry is a singer who grew up in a very conservative family. Both her parents are pastors and they only allowed her to listen to the Sister Act soundtracks. When she was a young teenager, she recorded a gospel album but it was not successful.

When she was 17, she moved to LA to pursue her music career. It was difficult for Katy to get her foot in the door and she had three record deals not go through but she finally signed with Capitol Records in 2007.

Katy Perry then released her first single “Ur So Gay” and “I Kissed a Girl,” which did very well on the charts and helped her career take off. In 2008, she released her first pop album called One of the Boys and it made the Billboard top 10. She then got a Grammy nomination for Best Female Pop Vocal Performance.

In 2010, Katy Perry released a studio album called Teenage Dream which had hit singles like “California Gurls,” “Firework,” “E.T.,” “Teenage Dream,” and “Last Friday Night (T.G.I.F.).” These singles made Katy Perry the second artist behind Michael Jackson to have five number 1 hits from one album.

RELATED: Are Taylor Swift And Katy Perry Collaborating On A New Song? All The Clues So Far

In 2013, Katy released a new album, Prism, which had hits like “Roar” and “Dark Horse.” Then in 2017, she released her album called Witness which made Katy have three consecutive number one albums.

When it comes to Katy’s romance life, in 2009 she became engaged to Russell Brand and they got married in 2010 in India.

Katy Perry was born on October 25, 1984. To learn more about her, keep reading for her natal chart.

The Sun gives you insight into your identity, ego, and path in life.

With Katy’s Sun in Scorpio at 2:22 degrees, she is probably pretty intense around the people who know her.

Scorpios are very motivated and will give their all in whatever they are passionate about. However, they do not like to be told what to do and instead will do what they want to do.

They like to be in control of their life and the situations that they are in. They are very determined and patient.

They will go after what they want but will make sure that the timing is right and that it makes sense to do so.

They also enjoy exploring the mysteries of life and are drawn to peculiar things. They also do not get scared easily and can tackle any obstacle thrown at them.

They are very resilient and will keep fighting for what they want.

RELATED: Which Aquarius Celebrity Is Most Compatible With Your Zodiac Sign?

With Katy’s waxing crescent Moon in Scorpio, she is likely very emotional and intense.

Moon in Scorpio people have a great ability to see someone for who they are.

They are very in touch with their emotions and rely on their intuition.

They feel their emotions fully and it can feel like they are on an emotional rollercoaster because they have very high highs and very low lows.

They need change and love new beginnings. Moon in Scorpio people are very driven by their emotions, but spend a lot of time trying to control and understand their feelings.

They also love spontaneity and are very drawn to adventurous and thrilling experiences.

If they feel bored or underwhelmed, they sometimes like to stir up some drama and do dramatic things that make them feel connected to their strong emotions.

When it comes to their relationships or aspirations, they can’t be in a situation that they aren’t fulfilled in.

They put their all into everything they do and they want to feel passion and excitement in their relationships and career.

They yearn for a long-lasting relationship and also want a partner that is supportive and will make sacrifices for them.

They have a tendency to play games with their love interest to make sure that they will stick around.

However, they don’t do this consciously but do it because they are scared of getting hurt.

They have a difficult time opening up at first because they can be a little skeptical in the beginning of relationships.

However, once they are in love they are very loyal and committed to their partner.

They are incredibly powerful and intellectual.

They can handle other people's emotions very well and straightforwardness will not frighten them.

Certain people enjoy having the support of Moon in Scorpio people but others can feel intimidated by their naturally strong presence.

With Katy’s Mercury in Scorpio, she likely wants to understand things as much as she can.

If she is curious about something, she will ask questions and learn about the topic until she grasps it.

Someone with Mercury in Scorpio does not want to merely scratch the surface but wants to dig deep.

Even with getting to know other people, they aren’t afraid to ask the hard-hitting questions.

They also tend to be very observant and intuitive. So, they know what is going on around them and usually can sense the truth to situations.

It would be very difficult to pull the wool over their eyes or trick them because they are usually very suspicious and can see through lies.

A Mercury in Scorpio person is usually very well-spoken.