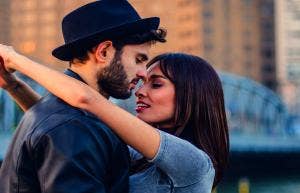 The Pisces man is one of the zodiac signs that embodies all the traits of the other signs, so you're in for a real treat if you find yourself interested in, or in love with, this male zodiac sign.

Imagine yourself dating a superhero, someone who will have a lot on his mind, and might be in another world when you’re talking to him. Why? Because he’s thinking of all the rules he wants to break later at night. Or, maybe you are the one he has on his mind.

While Pisces is going to appear calm and collected, his mind is probably in overdrive, with thoughts and emotions swimming around like currents in the ocean.

RELATED: Who Pisces Is Most Compatible With In A Relationship (And Their Worst Love Match), According To Astrology

Because of the deep connection he has with his feelings, he’s artsy — a writer, musician, or something in the creative arts field. That also means that his mood can change from one day to the next, so be prepared to ride the wave.

What does a Pisces man in love look like?

Whether or not you're with this zodiac sign, if you want to get closer to him, here are 7 things you probably didn't know. After all, Pisces men act a certain way when they're in a relationship.

1. Pisces men will listen to you.

He’s attentive and in tune with your needs. He will be happy to spoil you with gifts and compliments, and even just a token show of appreciation will keep your Pisces man content.

When it’s time to get him a gift, a more personal, creative present will go a long way as opposed to a gift card.

2. He likes to get a kinky in the bedroom.

Though he will appreciate any time spent in the bedroom (he's a man, after all), he will most enjoy role-playing and fantasy. This is a man who likes to escape reality every now and then, and that doesn’t stop under the sheets.

That doesn’t mean it’s all about sex and intimacy — he still wants passion and meaning behind the encounter.

3. But he can also be impulsive with his spending.

He’s an emotional man, and that means he can become impulsive with money. He’s not going to be one to sit on a decision about a big purchase; instead, he’s going to buy it and worry about it later.

If need be, he can be thrifty, but it’s not something he will be thrilled with.