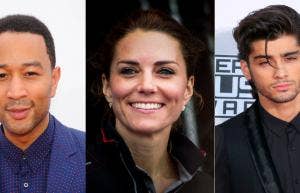 The disciplined Capricorn zodiac sign has produced many of history’s greatest minds and masters of almost every domain. Among them are the likes of Martin Luther King, Jr. and Isaac Newton.

It’s hard to live up to those two names, but there are some modern-day Capricorn celebrities that are greats as well. These famous Capricorns discipline helped them achieve fame and success.

Capricorn eminent personalities include their notoriously seriousness about their work and responsibility when it comes to notoriety. If a Capricorn is famous, it’s because he or she has worked extremely hard at their craft and regimented in practicing and achieving their goals.

Here are 50 famous Capricorn celebrities from all walks of life — athletes, musicians, actors, comedians, and even a former First Lady!

Singer/songwriterJohn Legend is not only known for his marriage to model Chrissy Teigen, but his powerful ballads and lyrics. His hits include “All of Me,” “Ordinary People,” and “Heaven.” He’s currently a coach on The Voice.

This little lady is the first-born daughter of Beyoncé and Jay-Z. At only 8 years old, she’s won a BET Award, BET HER Award, and NAACP Image Award. With parents like hers, there’s no doubt she’s destined for greatness!

The Duchess of Cambridge married Prince William in April 2011, with her eldest son, George, third in the line of succession. But though she’s part of the royal family, she’s received recognition for her charity work involving children, mental health, and addiction.

As a solo competitor on The X Factor, Malik later went on to be part of One Direction. Since leaving, he’s released two studio albums, with hits like “Pillowtalk” and “I Don’t Wanna Live Forever.”

No, he’s not just the younger brother of the hunky Chris Hemsworth, or the ex-husband of Miley Cyrus; this Aussie is an actor. He’s starred in The Last Song, The Hunger Games films, and Independence Day: Resurgence.

While many recognize Bloom from his relationship with Katy Perry, he made his breakthrough starring in The Lord of the Rings films. He’s also starred in The Hobbit, the Pirates of the Caribbean movies, and appeared in Kingdom of Heaven, Troy, and Carnival Row.

This former first lady of the United States is more than just the wife of a President! She attended Princeton and Harvard Law School, and continues to be a role model to women everywhere. She spent her time in the White House as an advocate for healthy eating, nutrition, and education.

At 98 years old, Betty White’s career has spanned more than 8 decades! She’s most well known for acting on The Mary